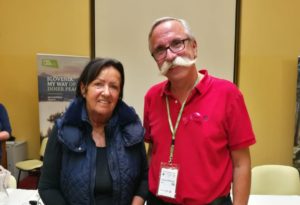 The International Naturist Federation (INF-FNI) now has two presidents. At its 37th congress October 7-10 2021 at Terme Banovci in Slovenia, the General Assembly approved a motion negotiated by the Dutch Federation to have the two candidates serve concurrently.

Stéphane Deschênes (Canada) joins Sieglinde Ivo (Austria) as co-president until she retires at the end of her term in three years; at which point she will have tirelessly served as the president of the INF-FNI for 16 years. This arrangement has several advantages. First, it joins two distinct factions in a cooperative arrangement that is typical of naturism and that may be an example in many countries that are plagued with the divisive politics. Secondly it allows for an orderly and gradual transition. Finally, having co-presidents provides more leadership for the many modernization projects and challenges that face by the INF-FNI in the next few years.